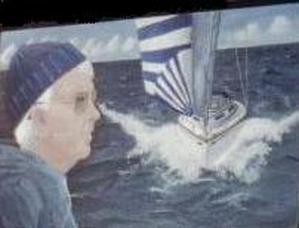 Andy had an uncanny talent to capture the intimate.  In these paintings, you will see the expression that is forever captured on faces well known and loved by Andy.

"This piece represents a lot to me.  It is a piece that is based on the image of my late grandfather staring out into the sea at a sailboat.    I tried to attain realism while using surrealism in the material. This painting holds personal value to me because my grandfather was a sailor, not to mention we scattered his remains at Sea.  A possible name could be 'One With the Sea'."

"One thing I could change is the character of the sea on the  boat.  Maybe the sea could be a little more violent or "emotional"." 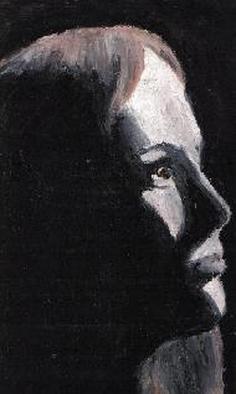 Sunny Mullarkey was Andy's freind who was also a reporter for the Beaufort High School article "Sidekicks", feautured in the Beaufort Gazette Newspaper.  Sunny conducted an interview with Andy and his mom upon Andy's nomination for the South Carolina Heroes Award in 1997.

Karen assures me that this portrait captured the subject completly. "Sunny was Andy's first girlfriend, and it looks just like her."