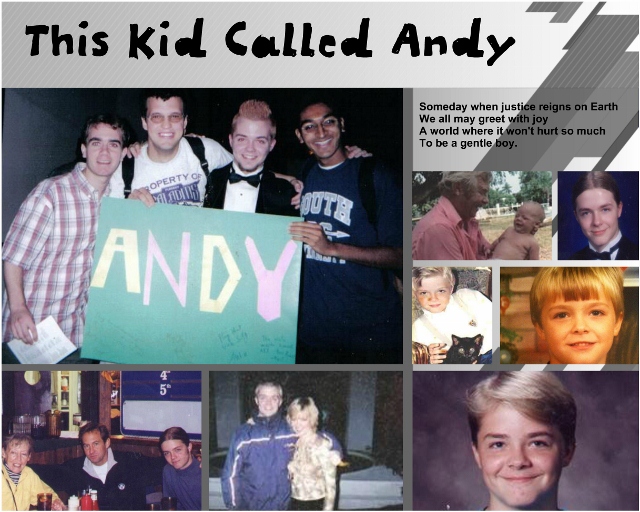 It was Election Tuesday.

It's a day so vividly clear - so well remembered - by his mom.

It may seem like only yesterday at times - and yet it was years ago.

Time was on the move in a direction no one expected.

There had been a lot going on in Andy's life at the time - the breakup between him and his fiance - intimidation by a criminal against whom Andy had testified - just a lot of things. Time had changed since first Andy knew he was to be a father. Time had changed since he told his mom on Election Day. Tim was about to change even more.

Things were happening. Things that - on another day - in another moment of time - might have seemed less the lasting, dark, doom and gloom than on THIS day. THIS moment.

It's amazing how vital a role 'time' plays.'

And how fickle time can be.

Perhaps this tiny life represented a hope for him, and at this time - this particular time in his life - that is what kept him going. This hope. This promise. This child being granted to this young man who had known little of his own father. This father who pledged to be the best father on earth.

But this hope was extinguished - forever.

Andy's chances of becoming a father were stolen from him when his now ex-fiance took it upon herself to abort the baby - Andy's baby. Without the slightest consideration for the baby, Andy, Andy's thoughts, feelings, or sufferings - she made this decision.

And on THIS day - once that hope was shattered - so was his life.

He succumbed to the pain that only he could know.

He killed himself. He was 24 years old.

I hope it introduces Andy to you in a manner in which you grow to appreciate this extremely talented and passionate young man as I have.

I never got to meet Andy. Not in person, that is.

My father and his Grandmother 'Crackers' are 'first cousins' - making his mom and I 'second cousins' - but there were miles and years between us. I knew OF him - though had never had that chance to meet him.

I've grown to know at least a part of Andy over these years since his death.

Through stories told by his mom and aunt - through newspaper articles and photos and awards and recognitions - I have learned plenty about him.

By watching videos of his many concerts, and by watching him explain the Battle of Gettysburgh - wearing his full Federal Uniform and talking for over an hour without using a single note - I learned of the unbelievable insight and understanding Andy had of a war that ended in 1865. As if he had lived through it....as if he had fought it.

I've learned much about this 'child' who accomplished more in 24 years than most 'men' I know.

I welcome the opportunity to share with you the life of this one Andrew Keith Anderson.

You will be left in awe - as I have been.

The horrendous untimely death of Andy can be no more difficult for anyone than his mom - and she will always have my prayers for whatever strength 'surviving' requires.